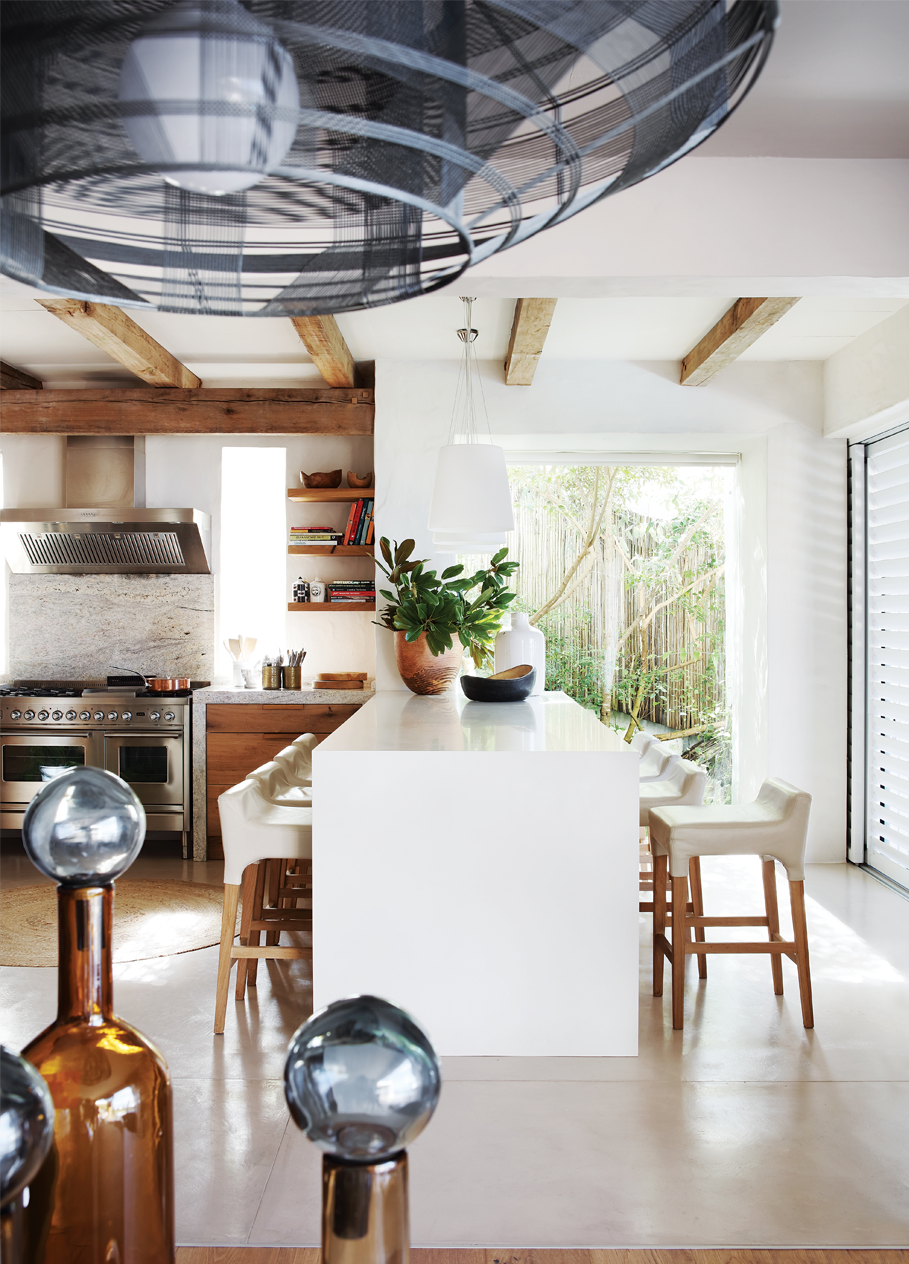 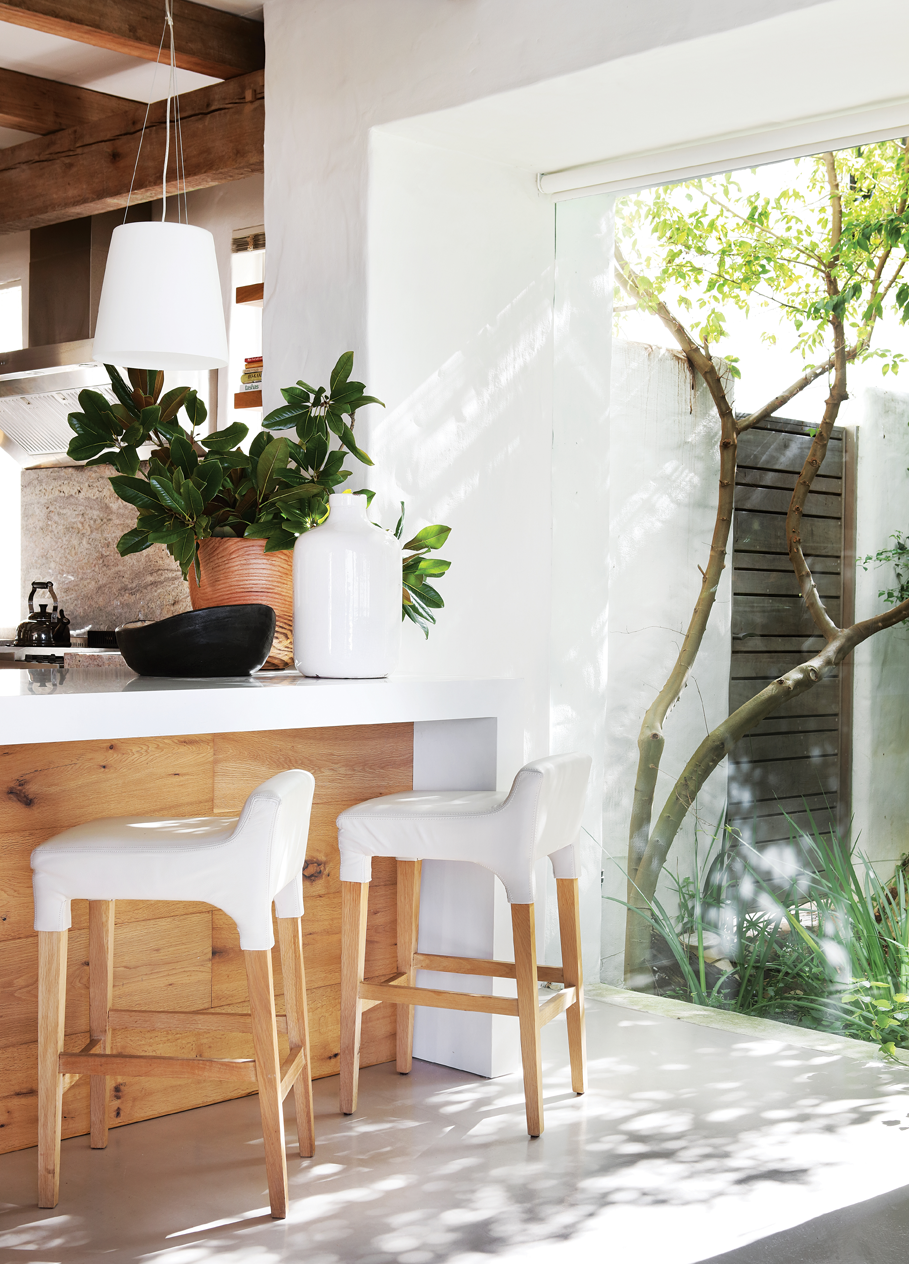 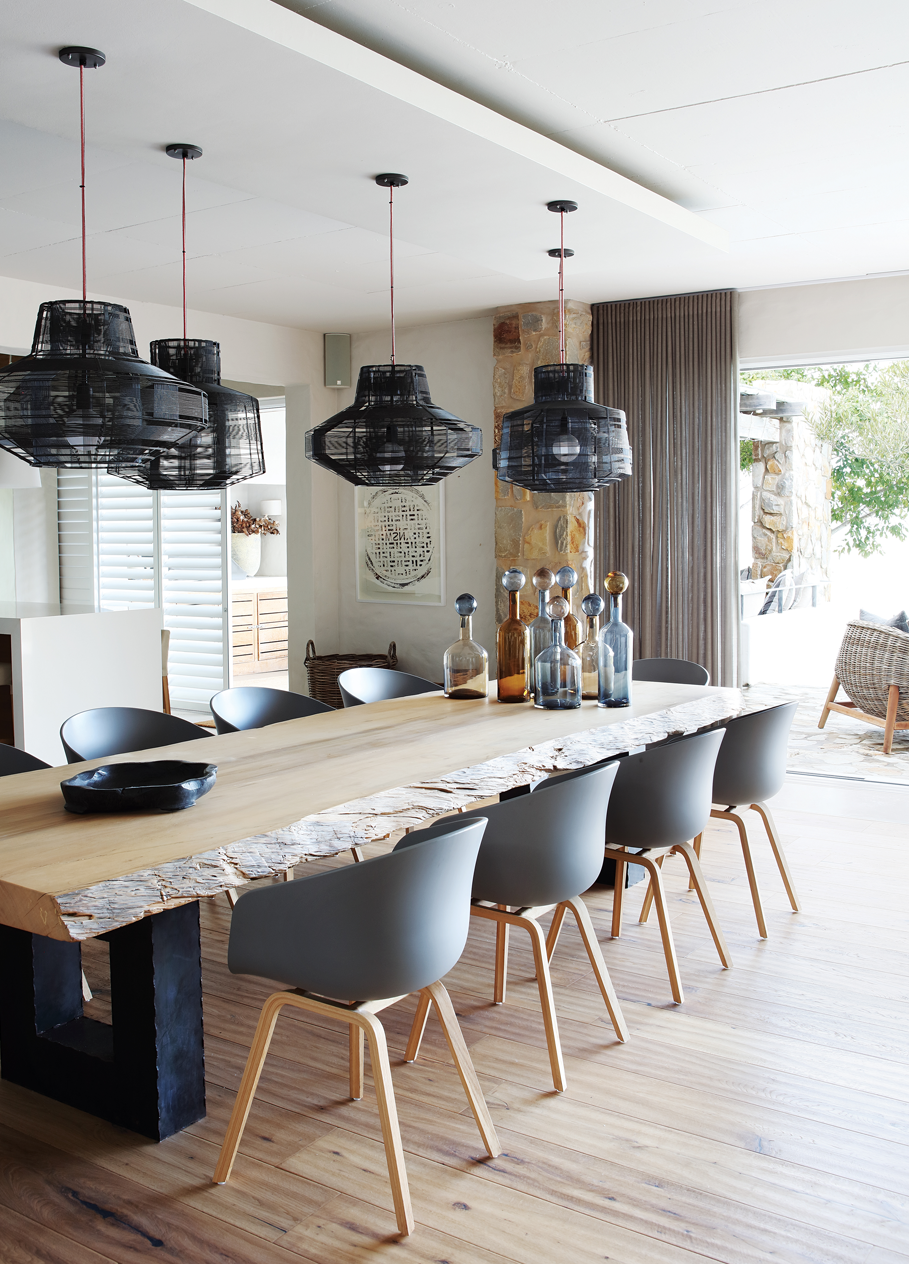 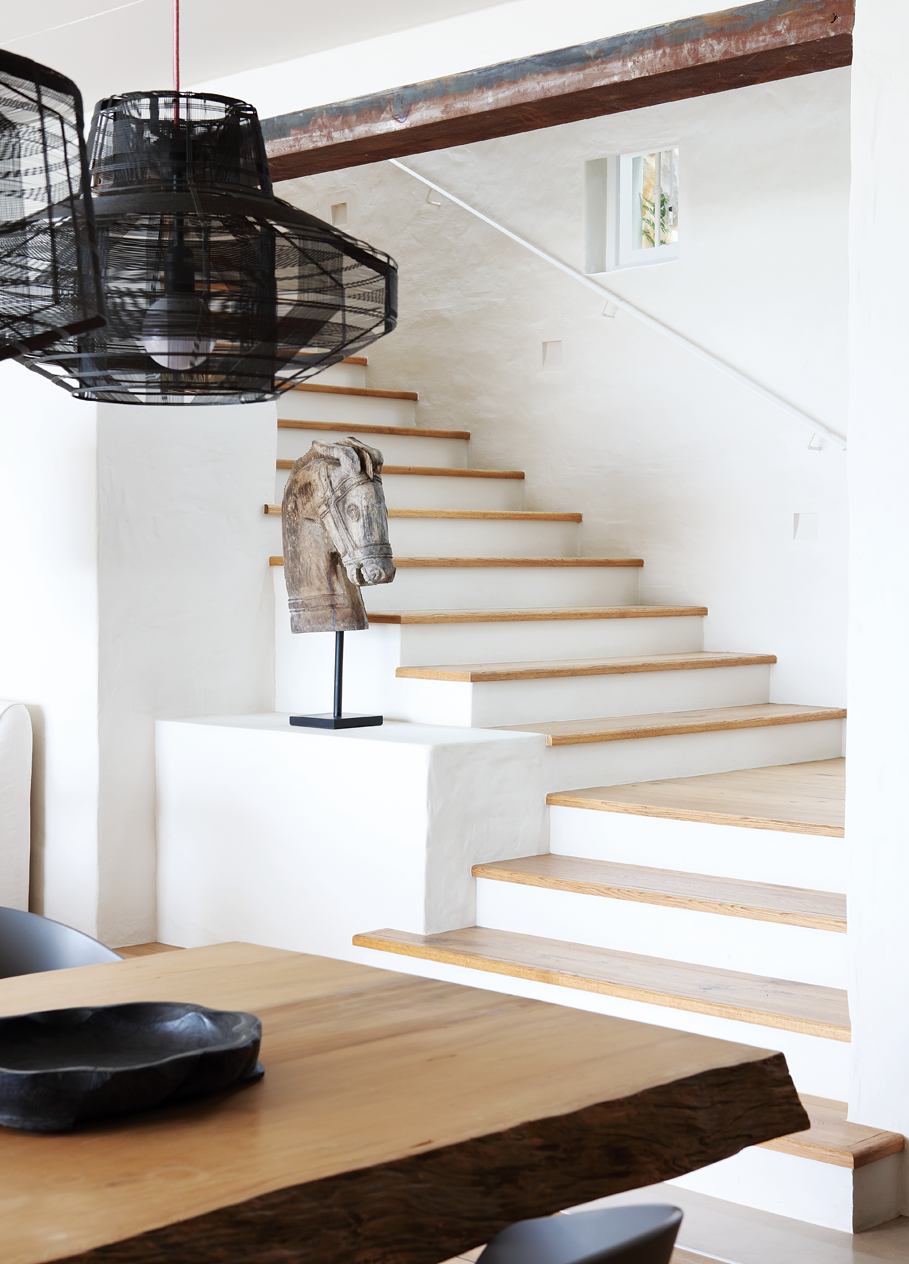 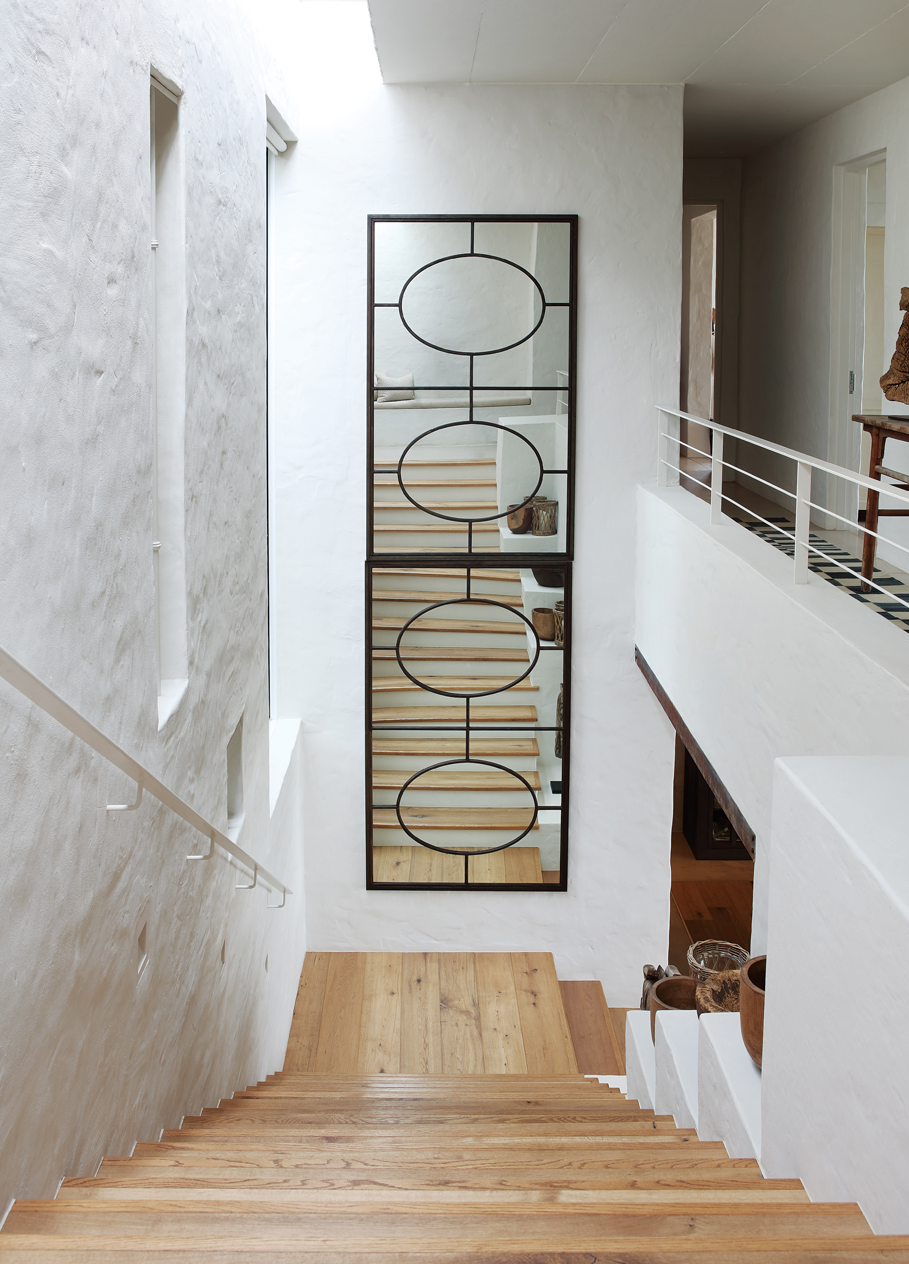 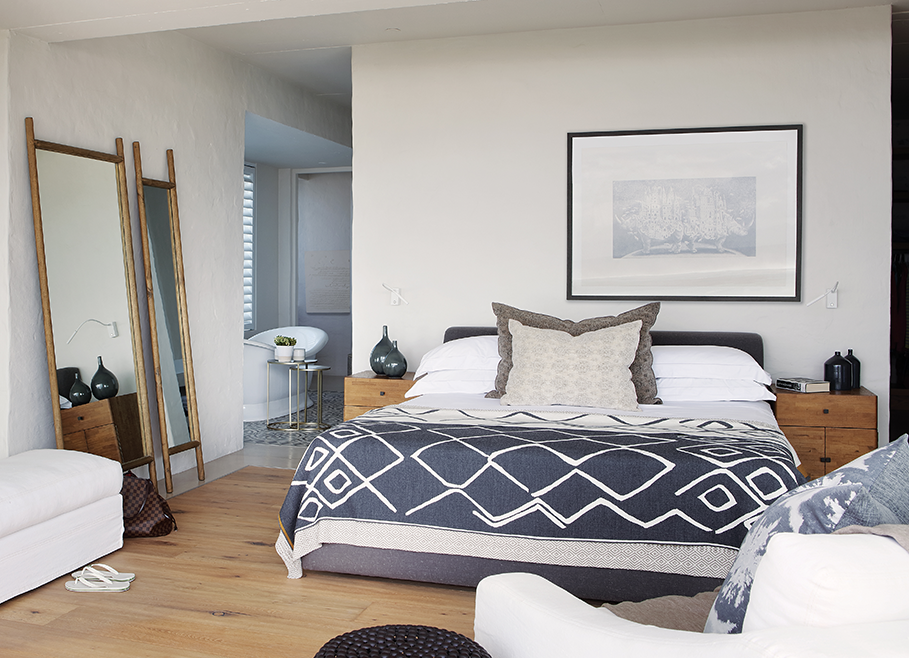 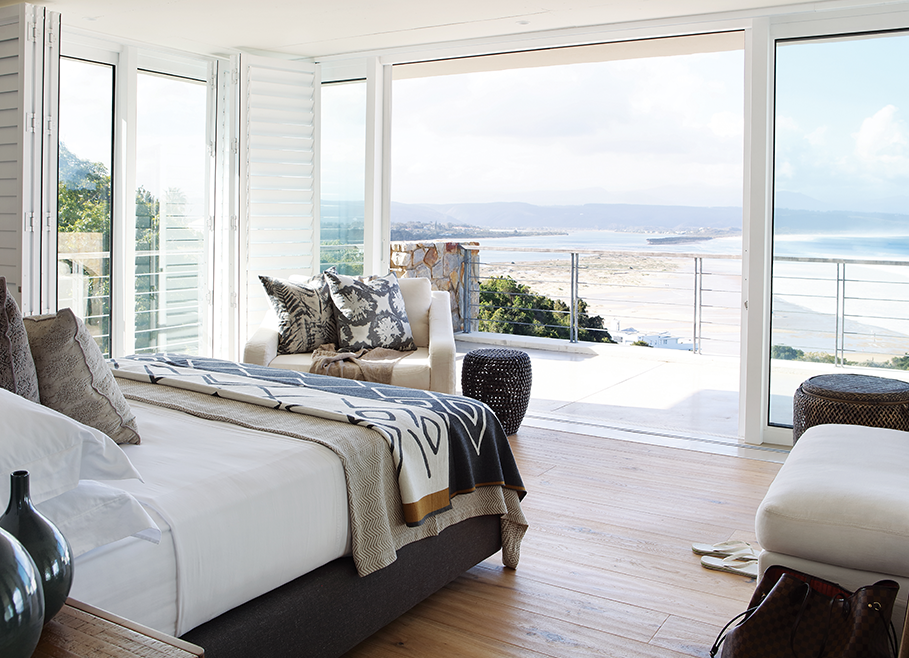 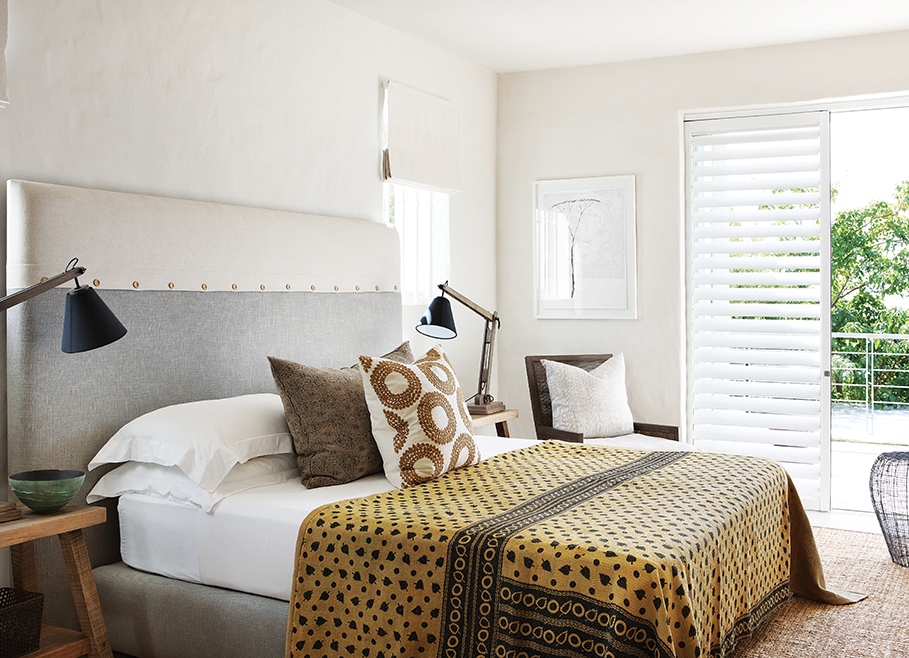 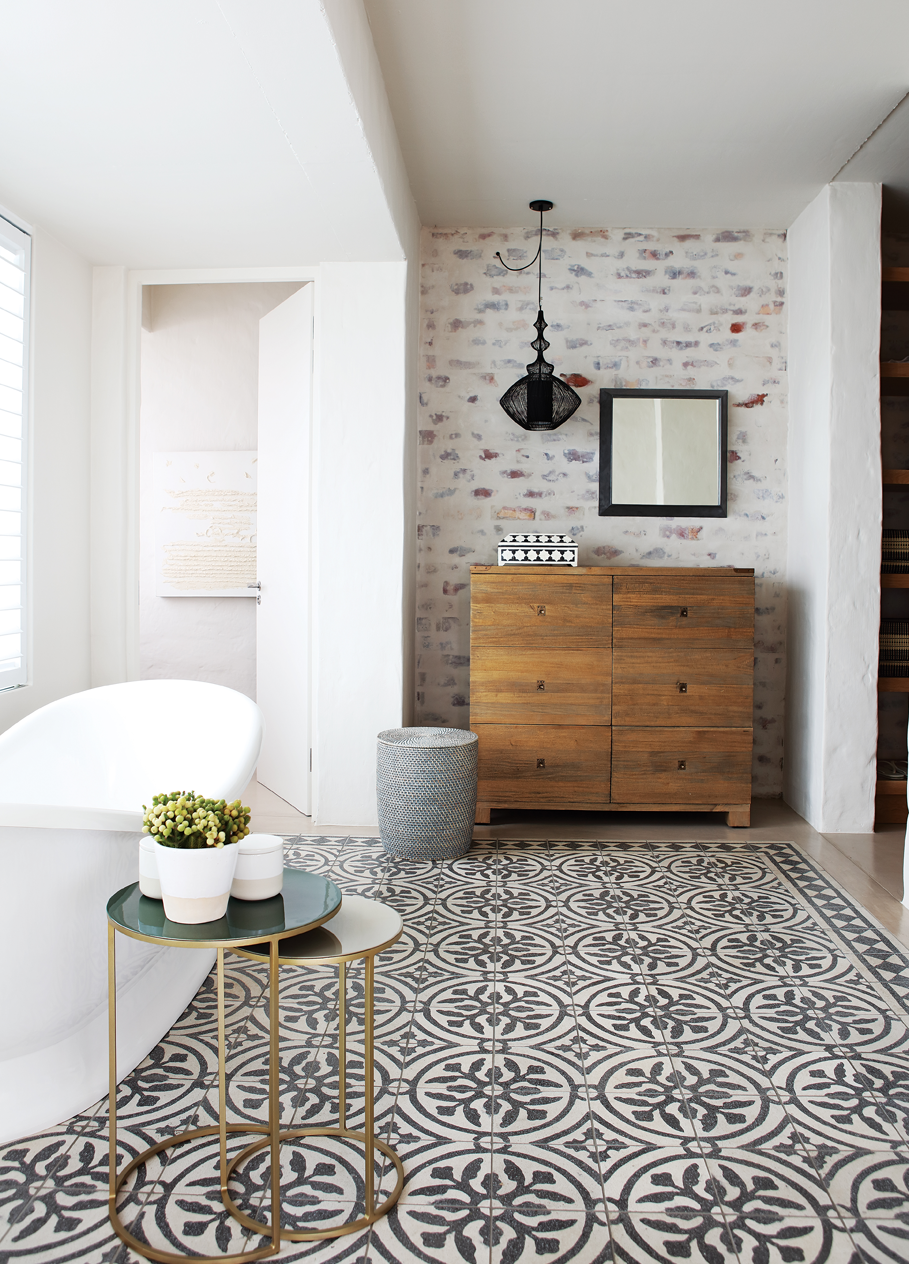 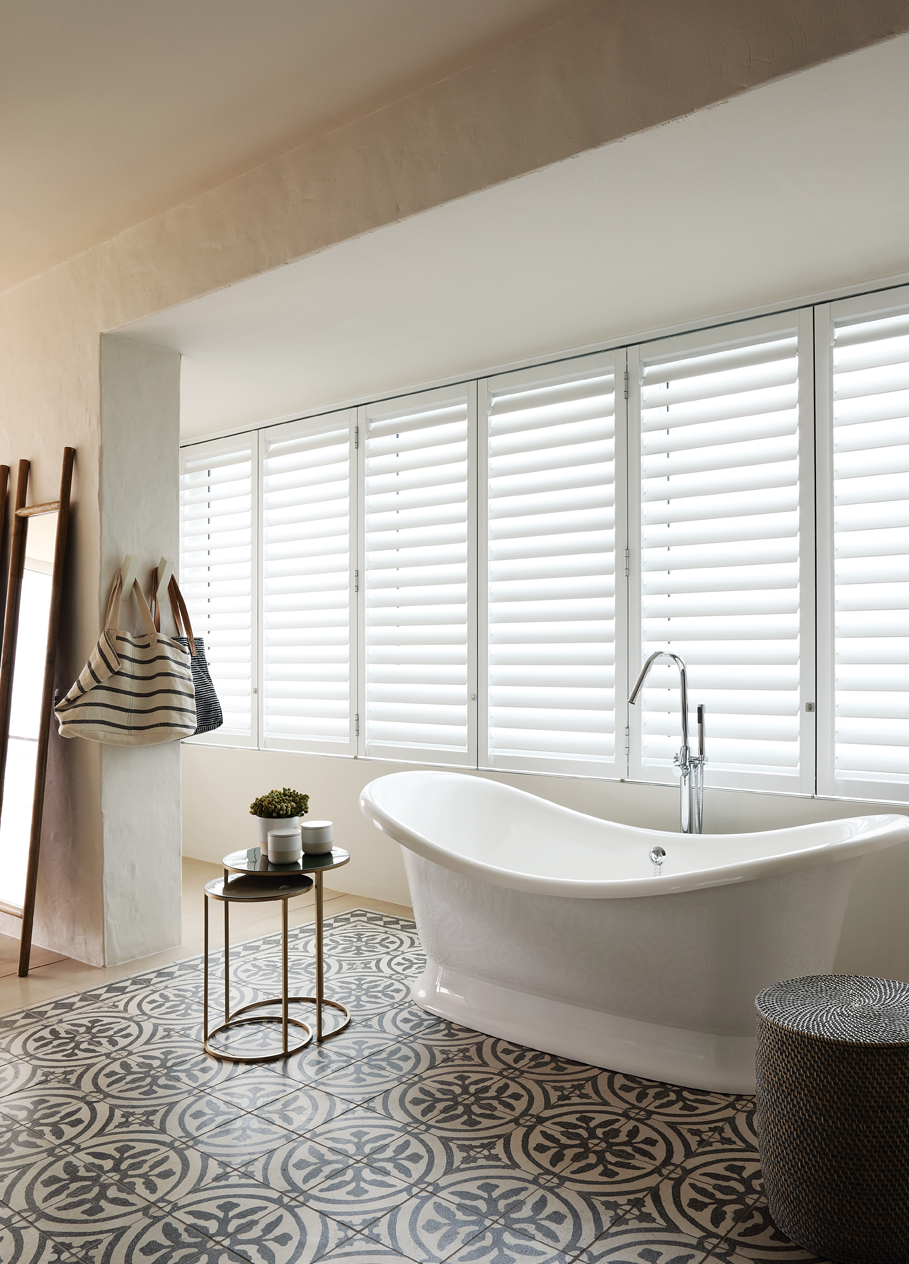 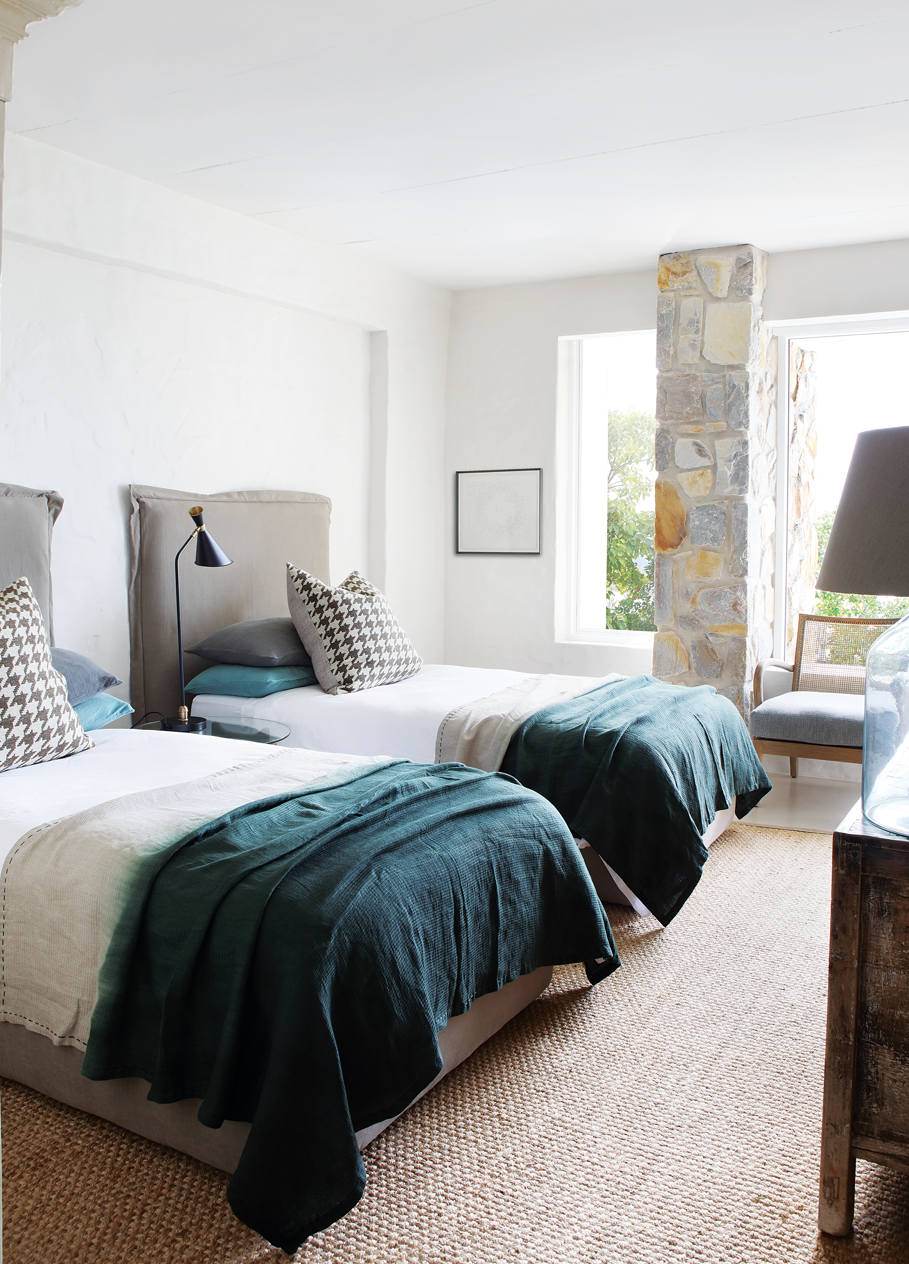 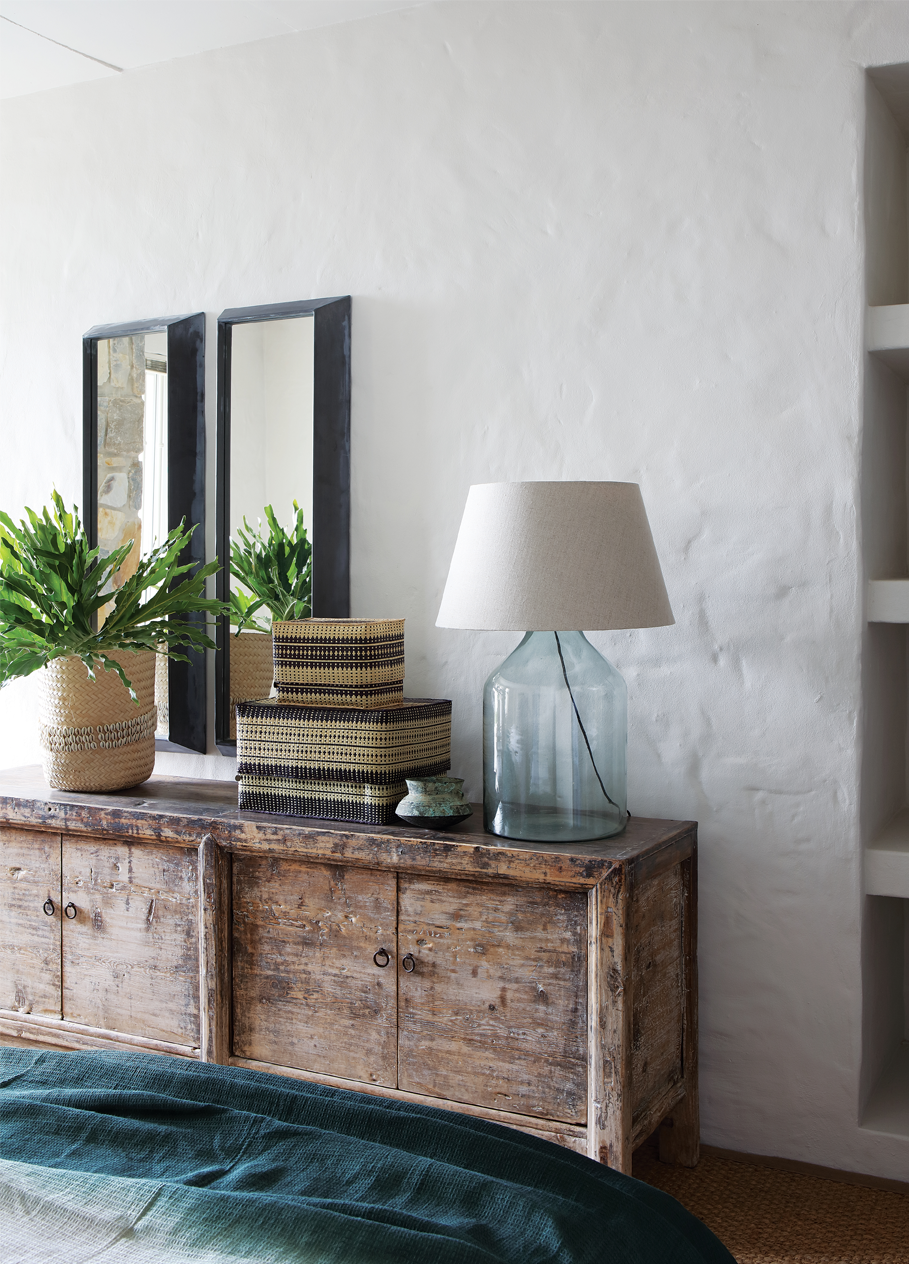 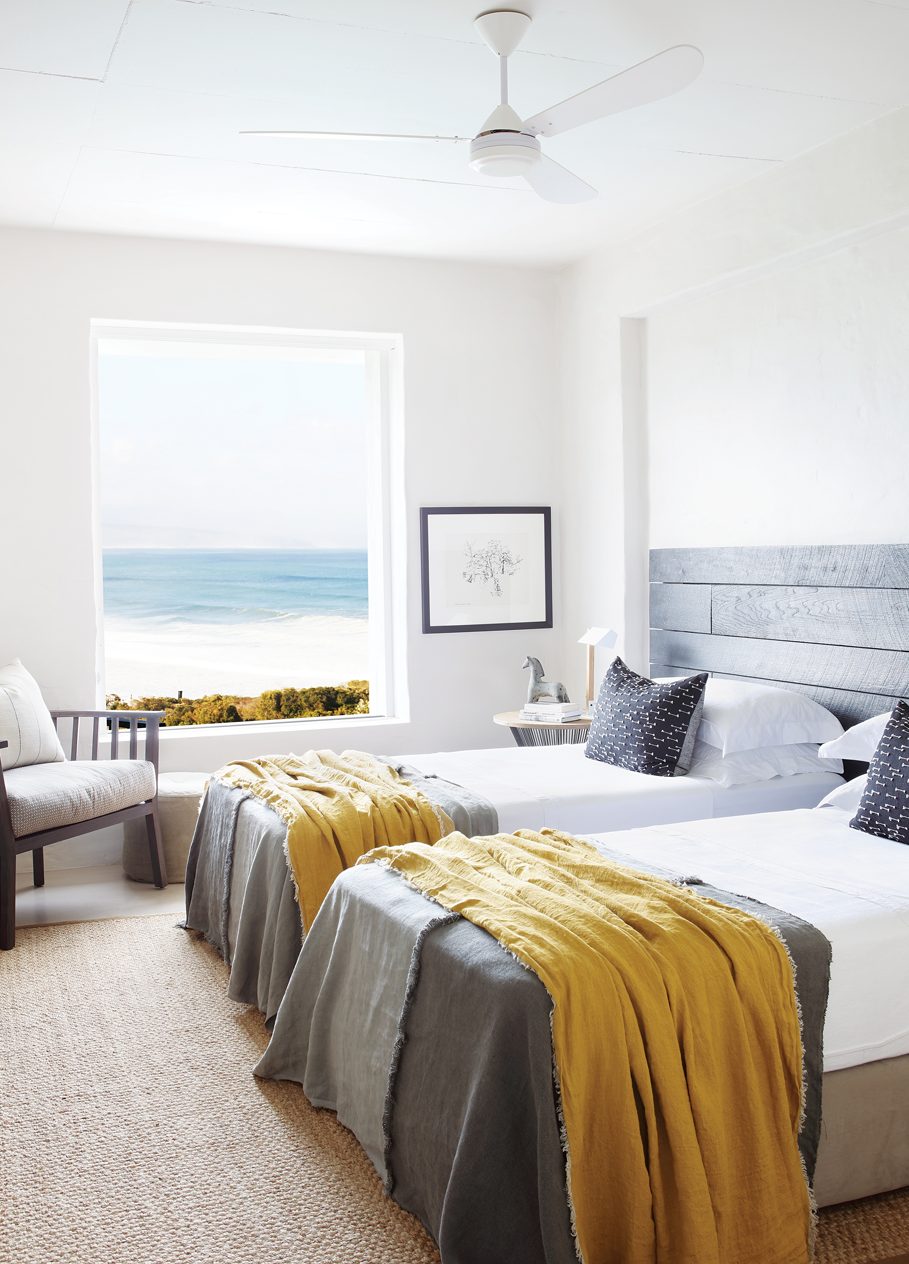 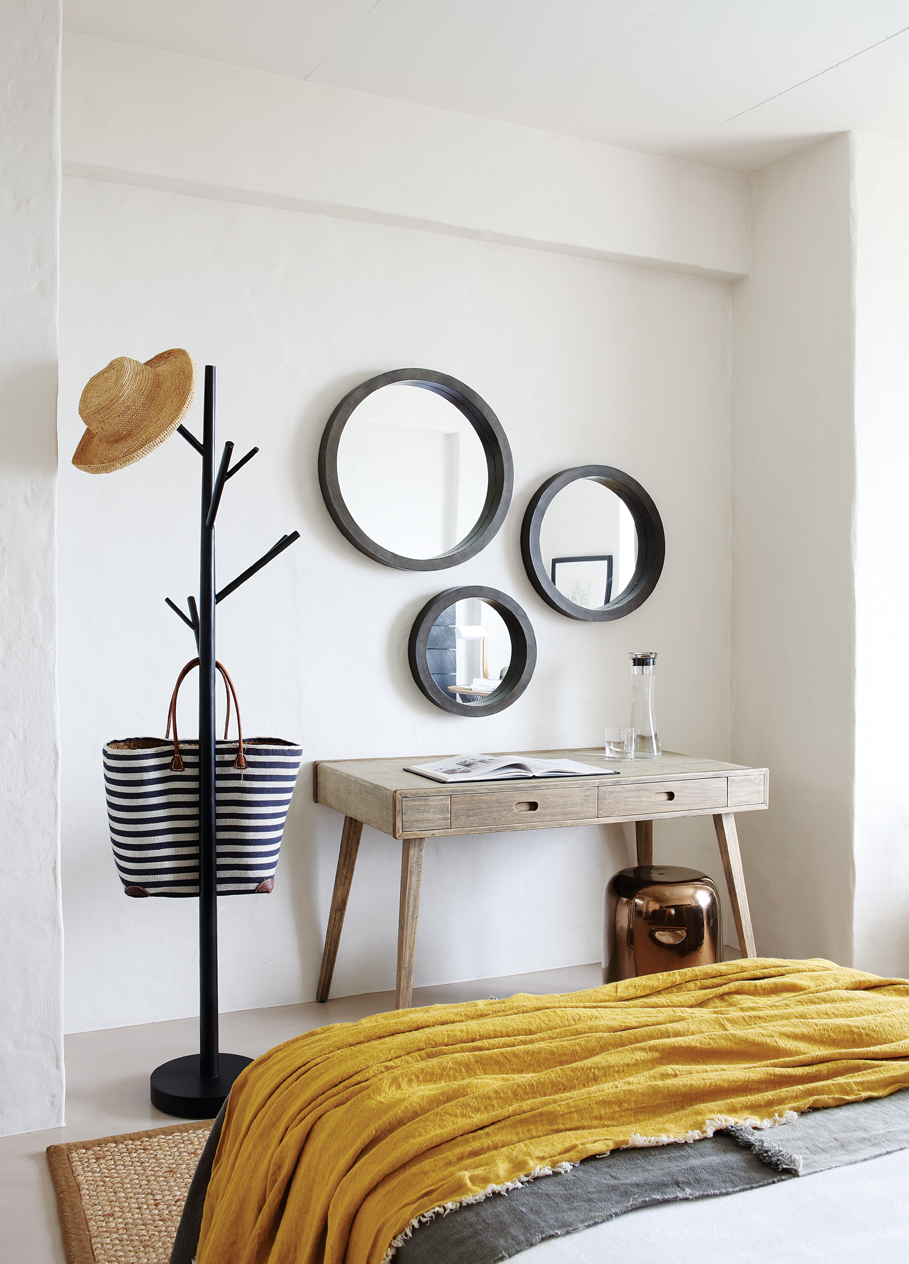 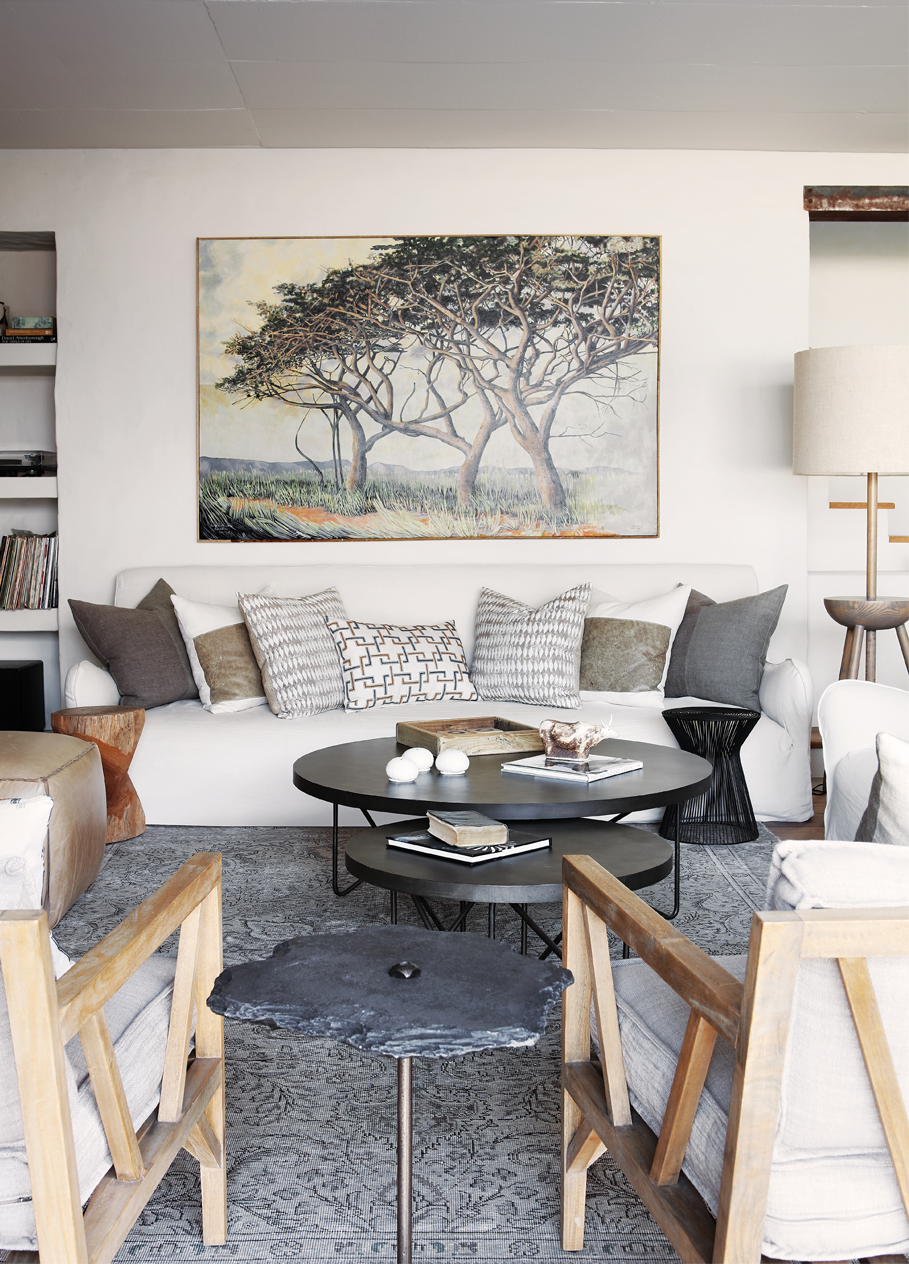 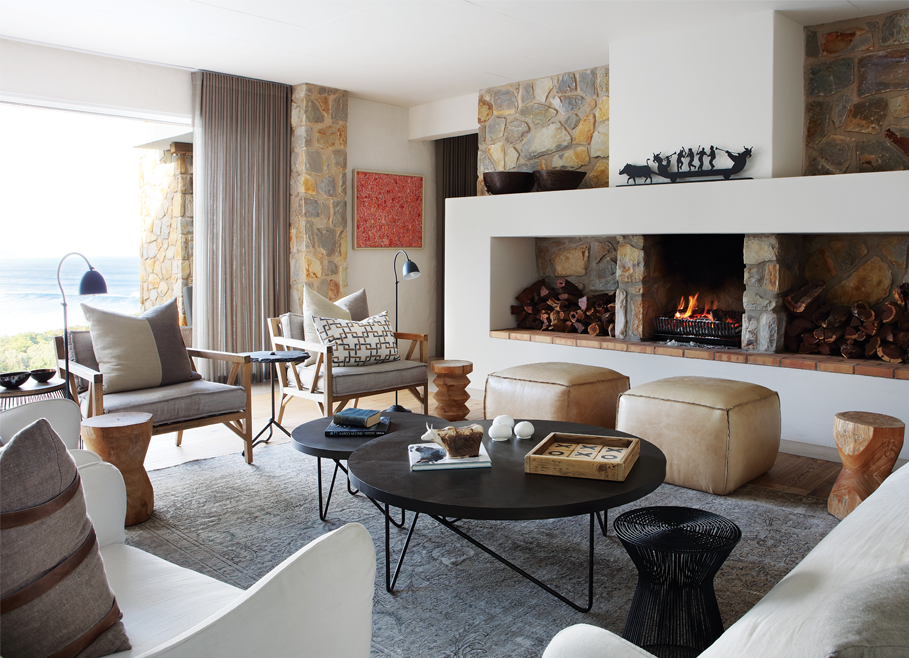 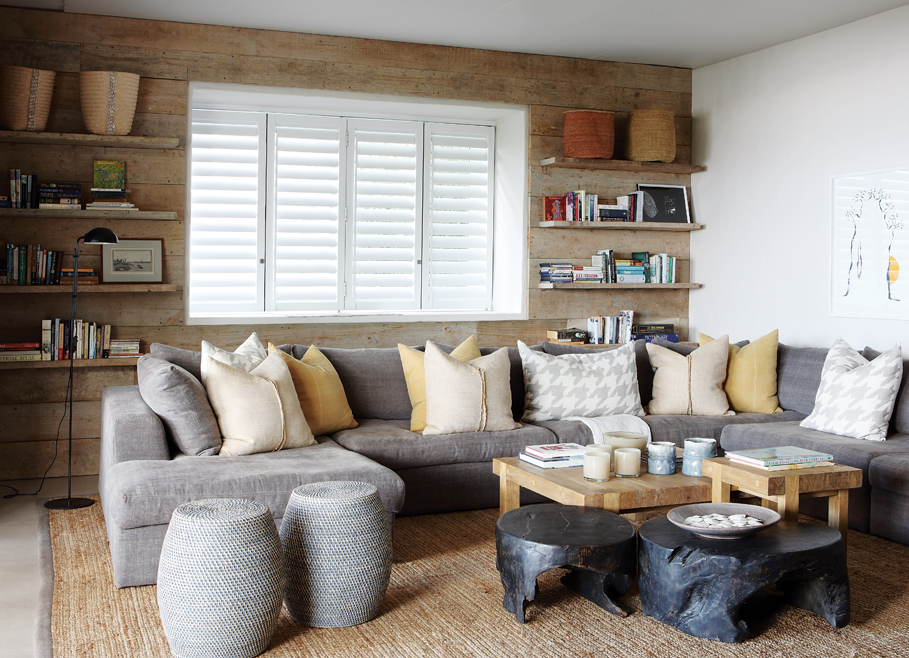 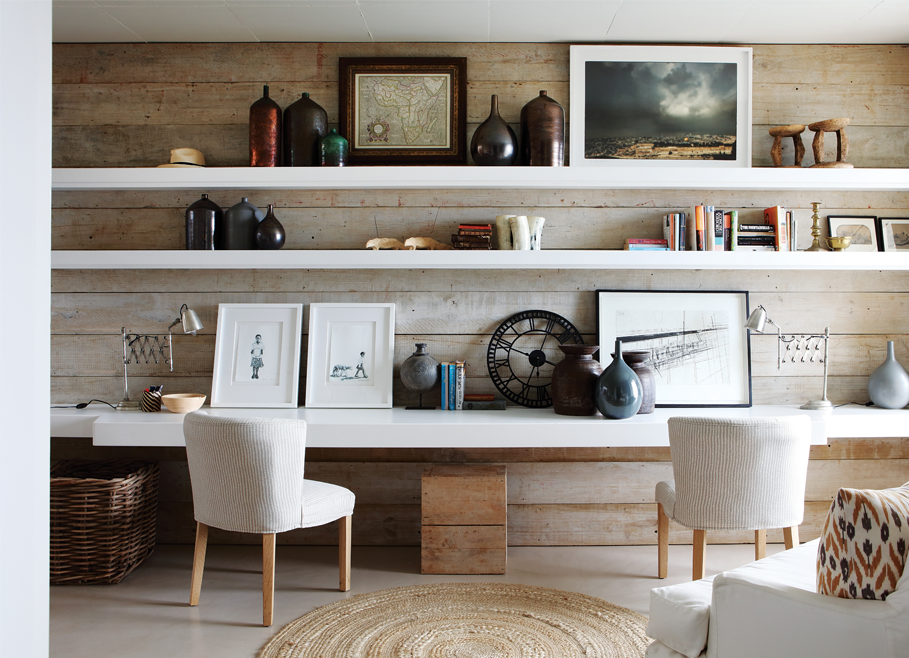 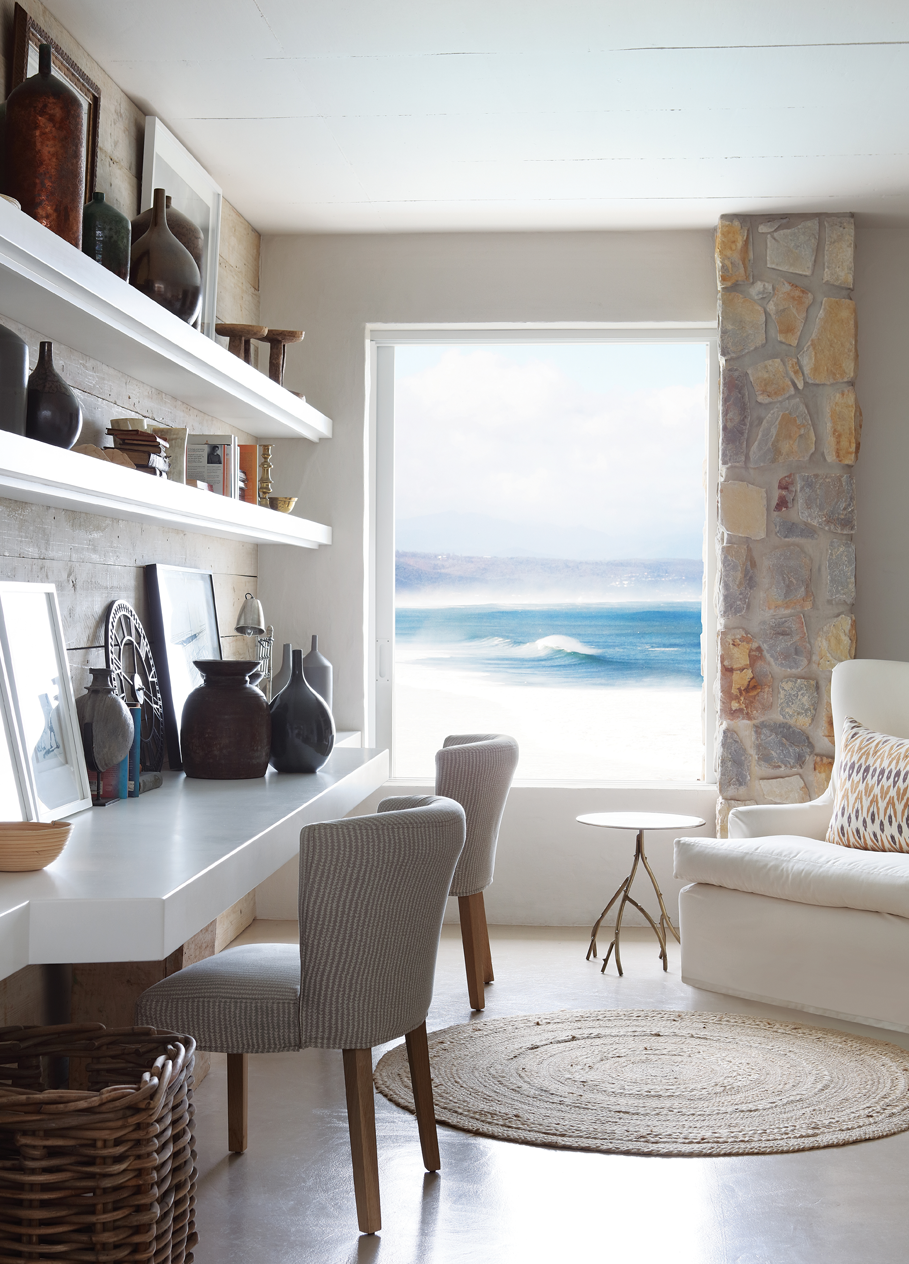 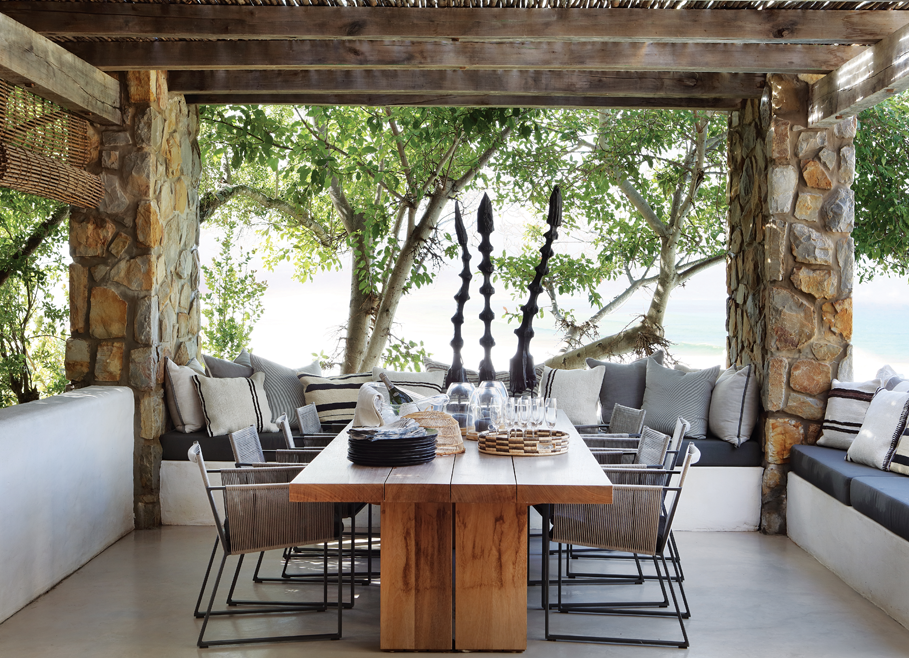 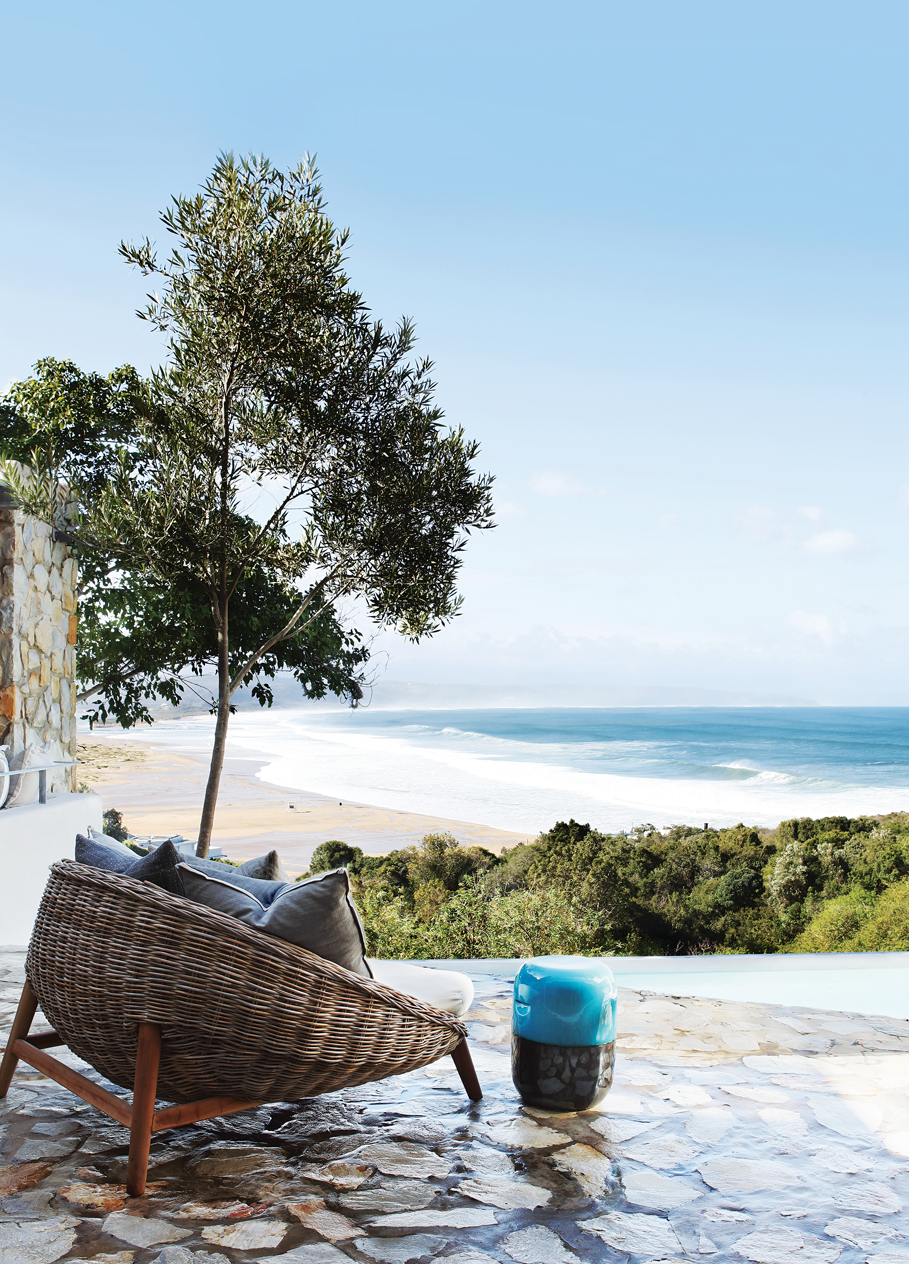 Bringing comfort, elegance and a mix of organic textures into a home is what Sumari Krige of La Grange Interiors has always done best. So it made sense for a Johannesburg family looking for a ‘home away from home’ to entrust her with the task of transforming their new build – which overlooks Lookout Beach in Plettenberg Bay – into a haven to which they could retreat.

With a vast green belt and iconic coastline setting the scene, Krige says that the game changing decision to stay clear of contrived ‘beach cottage’ references and azure hues is what makes the space so special. ‘We chose neutral shades with yellow accents to pick up the toneof the local granite used in the house,’ she says. The entrance to the home takes you directly into a study, which reveals the first glimpse of the views to come, and then branches off towards the main bedroom and three guest rooms. This landing also leads onto a double-volume stairwell that takes you down to the kitchen, lounge and dining room (which all inhabit the same vast open-plan space) and then a TV room and anotherbedroom.

Designed by Joeke Monteiro of Boni Monteiro Architects, the house is orientated so that almost all of its rooms capture the seascape. Because the owners wanted a holiday home that was not only beautiful but practical too, Krige chose a selection of loose-covered sofas for the TV room and lounge, and then added an assortment of wooden sidetables, steel nesting coffee tables, raffia stools and leather ottomans. In a home designed to appreciate the postcardworthy vistas (even the wire lights by Filipino design studio Schema were chosen because they don’t block views at eye level) the design team chose to keep the interiors simple. Natural wood and stone have been used extensively, and the uneven plastered walls have mostly been left bare. The expansive stairwell, for example, ‘is a wonderfully airy part of the home, so I didn’t want to clutter the walls with art,’ says Krige. Instead, a sideboard made of reclaimed wood on the landing – and a built-in stepped wall flanking the stairwell – provide settings for photographs, wooden bowls and objets d’art. ‘In the bedrooms, we kept the furniture pared down and minimal so it didn’t compete with the views. I softened the look with hand-dyed linen throws,’ says Krige.

The master bedroom offers outlooks from three different windows and is flooded with light, so Krige chose grey tones with accents of yellow for the soft furnishings. Rustic standing mirrors bring glimpses of the outside in, while the en suite bathroom adds a dash of drama with its graphic Moroccan tiles. Wood and glass feature heavily throughout. Krige explains that she loves the contrast of light-wood oval pieces with the organic shapes of the ‘tree trunk’ tables in the lounge: ‘It’s details such as these,’ she says, ‘that give the home the character that the owners wanted.’ Monteiro also clad the walls of the lounge and study in wooden scaffold planking, adding a rustic element to the interior. And in the kitchen-cum-dining room, the consideredbalance between contemporary and natural textures becomes especially evident. Roughhewn ceiling beams and a large wooden dining table are offset by a slick Caesarstone kitchen island that is surrounded by inviting, upholstered bar stools perfectly suited to both long, conversational breakfasts and quick meals grabbed on the way to the beach. The unobstructed ocean panorama remains, of course, the jewel in the crown. The kitchendining room leads onto an outdoor dining area that feels as if it’s perched above the coastline, with a terraced garden that leads slowly down to the pool. This is Krige’s favourite part of the home, she says, with its numerous built-in benches and loungers. And it’s very hard not to be drawn to the oval Florence daybed that is next to the pool. ‘It’s exactly where you want to sit to best experience the property,’ she says.